NTJDC maximizes Jewish support for Democrats at the federal, state and local levels of government.

We do this to promote both social justice in America and a secure, democratic Jewish State of Israel.

We are fortunate to have as our guest speaker from Austin, political analyst and owner of Quorum Report, Harvey Kronberg.

What Others Have to Say about Harvey Kronberg:

Texas Monthly:”Who reads Harvey Kronberg’s dispatches from the State Legislature?”
Everyone. The nexus of political gossip right now isn’t the Cloak Room, the Austin Club or any
of the dark-whisky soaked haunts where politicos while away their evenings. It is the precise
location at any given time, of Harvey Kronberg.

You won’t want to miss this meeting!

We are fortunate to have the following speakers share their insight

Please consider becoming a member of NTJDC for 2019 Our dues are $36 per year which allows us to host  events such as this. You may join online by clicking here.

We look forward to seeing you on March 12!

– Keep all this in mind if he announces for Presidential run! 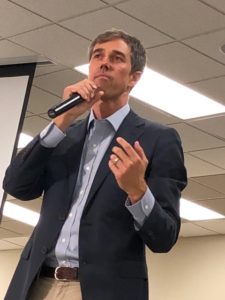 On August 14, Richardson was the site of one of the largest political rallies in recent North Texas history. More than 2,500 people attended the Beto O’Rourke Town Hall meeting at Richardson Civic Center. This event was initially organized by the North Texas Jewish Democratic Council, but as the size of public interest continued to rise, the event sponsorship was transferred to the Beto campaign. The steering committee of the North Texas Jewish Democratic Council was invited to a private meeting with the candidate prior to his taking the stage before the assembled crowd.

During this private meeting, the candidate discussed several issues of particular concern to the Jewish community with regard to Israel. Beto underscored his belief that the Us-Israel relationship is the pillar of US policy in the entire Middle East, and a joint commitment to democratic principles is the key to that relationship. When asked about his vote in Congress regarding the Iron Dome Defense system, O’Rourke provided his answer. A resolution was submitted on the last day of the session, authorizing a military expenditure of $250,000,000, without discussion or debate. An authorization of that size, said O’Rourke, should be examined and discussed no matter what nation or government agency was the recipient. He felt it was his Congressional duty to vote no on the resolution until discussion was possible, and his questions answered. Beto said that this was his only no vote regarding Israel, and he hoped that his explanation made sense to the committee members. Another member asked why he undertook a J Street mission to Israel, but did not travel with an AIPAC mission. His response was simply that J Street asked him to attend, and AIPAC did not.

Beto finished this meeting with the steering committee by re-emphasizing his total commitment to the security of Israel, while also suggesting that a two-state solution might be the only viable solution to the continuing domestic tensions in Israel.

The overwhelming consensus of the steering committee was that Beto answered all questions with an openness and well-reasoned response. He received a standing ovation at the conclusion of this private meeting before proceeding to a capacity crowd in the general assembly hall and two additional overflow rooms. Click here for more photos.

Comments are closed, but trackbacks and pingbacks are open.